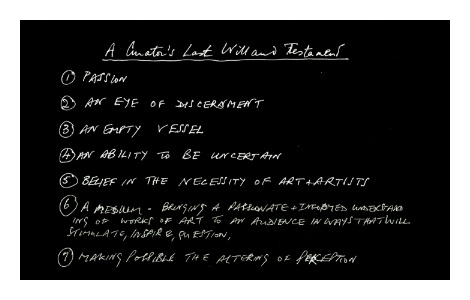 The 11½ minute film A Curator’s Last Will and Testament will be shown at the Art Gallery of New South Wales in the Yiribana foyer, lowest level 3.

The film will screen continuously during opening hours from 6th – 20th August 2012.

The film is an elegy ‐ a tribute to the late renowned Australian Art Curator Nick Waterlow OAM who curated the Biennale of Sydney in 1979, 1976, and 1988 and who also chaired the International selection committee for the Biennale in 2000.

Gatefold catalogues accompany the film and are available at the reception desk as a gift upon request.