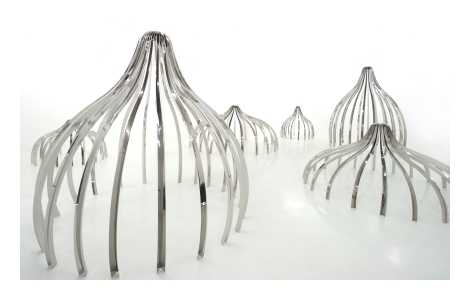 Ever since Thai artist Pinaree Sanpitak gave birth to her only child 21 years ago, she has been obsessed by the female form, particularly the shape of the breast.

It first appeared in her early anatomical paintings and charcoal drawings, as nursing her son she became conscious of how the breast upheld life itself, and in her later practice, Sanpitak has looked beyond the mother and child connection to the breast as a metaphor for womanhood and self.

The breast shape appears across several mediums in which she works: installation, painting, drawing, sculpture and fabric and paper-covered forms. It has appeared so much, she is often referred to as the breast artist. Among her most famous work is an installation of breast-shaped cushions in which people can rest on and explore their sensory perceptions. She's also made sculptures and coloured breast beads from Murano, and moulds and cookie cutters in the shape of breasts and has staged more than 30 events of culinary art.

"If people joke about my work, it reflects on them," she says with a shrug, adding she tends to work across both genders now.

Sanpitak's first Australian solo exhibition, Collection +, is open in the gallery of the Sherman Contemporary Art Foundation in Paddington.

Curated by Jasmin Stephens, the exhibition showcases the silvery breast-shaped The Mirror (2009) from the Gene and Brian Sherman Collection, together with four other significant pieces borrowed from private and public collections in Australia and Thailand to form an overview of Sanpitak's 20-year career.

The exhibition features three steel-made, stupa-like lawn sculptures from the eight-piece Breast Stupa Topiary (2013), which link the shape of the female breast with that of the Buddhist stupa.

Sanpitak first coined the phrase "Breast Stupas" while working with unthreaded silk hangings in 2001, and developed the idea of the breast as "something grounded and sacred" in the trellis-like frames exhibited in Singapore and the Modern Kunst Arnhem in the Netherlands.

The exhibition's centrepiece is Womanly Bodies, a forest of figurative vertical paper trunks which hang ceiling to floor. Made from paper sourced from the paper mulberry bush found in abundance in northern Thailand, they display the diversity of the female torso.

The installation was first shown in Australian at the Third Asia Pacific Triennial of Contemporary Art where it was acquired by the Queensland Art Gallery Foundation and has been kept in frozen storage to prevent deterioration and insect damage.

Stephens says she is drawn by the installation's spatial sensibilities.

"They are very sculptural, very special and very womanly," Stephens says. "I think the audience will relate to the idea of the body being the vessel that carries you from birth, through life and, ultimately, to your death."

Stephens says Sanpitak has an affinity with the material she works with and deserves to be as well known in Australia as she is among the international art fraternity.

"The breast isn't just about the breast, it's about the body," Stephens says.

"It's not a literal representation of the body, it is working with organic and geometric forms to convey something of her lived expression as a woman."

Educated in Japan and the United States, Sanpitak is the daughter of medical doctors and spent her childhood on medical campuses playing about the morgue. Her father was a gynaecologist before switching to pathology. She lives in the home of her grandfather in central Bangkok. Her son is studying fashion design in Belgium. With her octogenarian mother, Sanpitak served coffee to camped protesters demonstrating over the Shinawatra government, which fell in the recent military coup.

Sanpitak came to prominence in Sydney when her vast interactive sound work, Anything Can Break (2011), featured in the 18th Biennale of Sydney at the Museum of Contemporary Art in 2012.

Combining fibre optics and motion sensors and soundtrack, it comprised hundreds of origami "flying cubes" and glass clouds shaped as breasts suspended from the ceiling.

"My practise has expanded; it's not only about the human body any more," Sanpitak says.

Her most political artwork, Hanging From a Thread (2012), was made in the aftermath of Bangkok's devastating floods using cloth of the type issued from a royal family-sponsored relief pack to weave and hang hammocks.

The hammock represents refuge, the body, absent and present, as well as the precariousness of life.

Collection+, Pinaree Sanpitak is at the Sherman Contemporary Art Foundation until 13 December  2014.