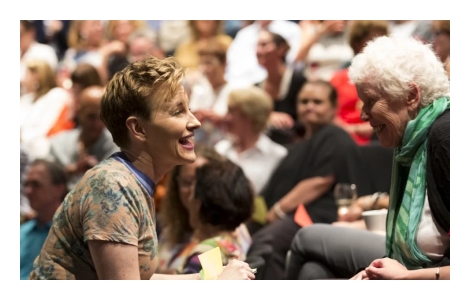 When a mother attempts suicide, her seven-year-old daughter makes a list of everything wonderful in life. She hopes it will sustain her troubled mother.

This finely crafted solo show achieves the seemingly impossible – a play about suicide and mental illness that is funny and life-affirming.

Performed in the round and with the house lights on, the audience is integral to the show. They read out cards with brilliant things written on them – hairdressers who listen to what you want, bubble wrap, the smell of old books.

Some patrons take on cameo roles: the girl's father, a vet, her boyfriend and Tracey the sock puppet counsellor.

All that might sound like a theatre-goer's nightmare, but rarely has audience involvement worked so successfully to enhance a play's themes and to invest in its story.

That it does is due in great measure to Kate Mulvany's warmth, generosity and nimbleness as a performer. She is one of our most versatile and gifted artists.

In a play so reliant on audience's response, the unexpected can happen. On opening night that included a young man whose trousers split at a crucial moment.

Mulvany rolls with whatever is thrown at her, addresses the audience directly mostly without the artifice of a fourth wall and makes light work of a demanding role.

Shifting seamlessly though time and tone, she begins as an uncomprehending child facing her first encounter with death; cradling her dog Sherlock Bones he is about to be put down.

She becomes a teenager, a shy university student, a young lover and married woman. She finds joy with her father in their shared love of music - preferably played on vinyl - and in the ever-growing list that reflects adolescent (Christopher Walken's hair) and mature pleasures (waking up late with someone you love).

But the list of brilliant things is like a trail of breadcrumbs leading through a dark forest of heartbreak.

As the list grows, so do her mother's suicide attempts. And when the mother eventually takes her own life, it is with a blank piece of paper beside her. It is one of the saddest images – as if she cannot find even one brilliant thing to nourish her.

By then the black dog has bitten her daughter's heels. She faces her own mental deterioration and the breakdown of her marriage.

The play, by the UK's Duncan Macmillan with Jonny Donahoe, is not about causes or pat solutions on Post-it notes. It is about the reality of suicide and mental illness.

Few of us have gone untouched by the suicide of a loved one. Mulvany is no exception, as she outlines in a moving program note.

The play raises questions about how we deal with suicide, the guilt of those left behind who may blame themselves, how episodes spike after the death of high-profile figures – the so-called Werther effect – and how the media reports such matters. It offers only one piece of advice for anyone contemplating suicide: Don't.

The piece, directed by Kate Champion and co-director Steve Rodgers, is staged with minimal props, most of which – from pens, chocolates and books – are provided by the audience. Help, it implies, is at hand.

"If you live a full life and you get to the end without ever once feeling depressed, you probably haven't been paying attention," Mulvany says.

This is a piece that demands we pay attention. To ourselves, the person in the next seat, across the aisle and beyond, and to the small things that bring joy. Brilliant.

Shit On Your Play

UPDATE: Less than a year later [Belvoir St Theatre, 10 - 26 January 2020] Every Brilliant Thing made a return visit to the Belvoir stage but, instead of being a one-woman show (with Kate Mulvany), it was then headed by a man, Steve Rodgers. The reviews from Every Brilliant Thing this time around: