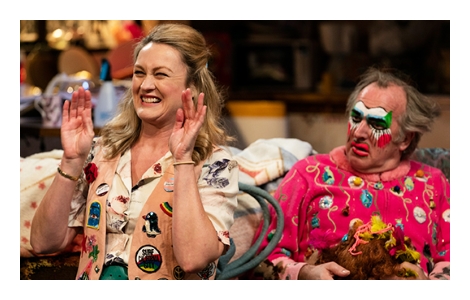 It's not just one Californian teenager transitioning in this incendiary kitchen sink comedy-drama by the genderqueer writer-performance artist Taylor Mac. It's the patriarchal world as we know it. For many that means liberation. For some, it feels like the goddamn house is burning down.

A glittering curtain screens the stage at first as disco music pipes us in. It falls away to reveal a domestic bombsite, the home of Arnold (Greg Stone), a stroke-disabled plumber, his long-suffering wife Paige (Helen Thomson), and son Max (Kurt Pimblett), who was until recently their tomboy daughter Maxine.

An immediate knock at the door introduces the other member of the family. Enter Isaac (Michael Whalley), a dishonourably discharged US Marine home after three years duty on mortuary detail in the Middle East. Prone to violent bouts of nausea, he's not a well man.

Isaac has come home to recuperate and straighten out his life (he's developed some hilariously exotic drug-taking habits), but this is not the same situation he escaped by running away to join the Corps.

Arnold, a racist jerk and wife-beater in his so-called prime, is now incapacitated, clad in cast-off women's clothes and garishly masked in clown-like smears of makeup. He sleeps in a cardboard box, only moves under duress, and when he steps out of line, Paige squirts water at him. To quieten him further, she slips oestrogen pills into his daily "shakey-shake".

Liberated from an oppressive, violent marriage, Paige now fills the domestic power vacuum. Her enthusiasm for all things anti-establishment is boundless. Meanwhile, the homeschooled Max skulks around the house, his surly funk intensified by self-administered testosterone therapy with drugs he ordered off the internet.

Confused, Isaac tries to impose order on what he perceives to be chaos. But his efforts are no match for a determined woman's desire to change her situation and the world.

Created on a pin-sharp evocation of the American blue-collar living room (a Michael Hankin design), Anthea Williams' production highlights Mac's humour while retaining the script's sexual-political heat. Her casting of the play is flawless and gifts Helen Thomson with one of the best roles of an already stellar stage career.

Dominating the production effortlessly, Thomson's Paige is giddy with newfound power. She also makes her autodidact righteousness slightly terrifying. Paige is both goddess and tyrant.

Everyone else exists in shadow to some extent, but Whalley and Stone are both excellent. Pimblett seems at full stretch sometimes in this company, but this is a striking mainstage debut nonetheless.

Hir is funny, politically nuanced and spectacularly well written with a sharp critique of American society embedded in the familiar upholstery of its domestic setting. Looming largest in Taylor's sights is the Angry White Man railing against anything challenging the hetero-normative convention, "the minute it becomes known he is barely lifting a finger but thinking he is lifting the world."

That is about as soapbox as Hir gets. Mac is across the complexities of change while championing its inevitability. There's a broad streak of humanity in Hir's acknowledgement that revolutions are never painless and that even those who stand on the wrong side of history deserve some sympathy before they are swept aside.